Map of how land is currently used in Newton

Zoning: Where We Are Now & How Did We Get Here?

We believe our new zoning ordinance should enable us to significantly increase our housing opportunities—in number and kind, for all sorts of people, all across the city—and improve our response to climate change. Adding more homes, especially within walking distance of village centers and transit stops, will help revitalize areas that made Newton a desirable place to live well before the advent of zoning in 1922 and the predominance of transit by automobile.

Newton’s current zoning code has not been substantially updated since the 1950s.

A quick example of a problem with the current code – even though people already live in Newton’s villages in the older buildings (most built before zoning), our current zoning code doesn’t allow new buildings with housing in our villages. To build housing now, builders need to go through the extra step of rezoning just that one lot.

It is well past time for a change.

A Bit of History of the Process 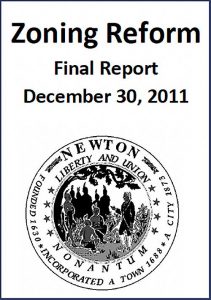 Ever since the Comprehensive Plan was developed in 2007, Newton has been working its way towards developing a new set of rules for development.

First in 2011, the Zoning Reform Group developed a plan to revise and update Newton’s zoning including a set of themes to guide the development of a new code.

A number of studies were completed to develop plans for specific aspects of development in Newton including: 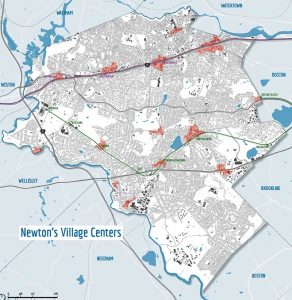 A Pattern Book was completed in 2017 to help understand the development patterns of Newton’s villages and lay the groundwork for developing a new zoning code that would address these patterns.

Finally, in 2018, an initial draft for a new zoning code citywide was developed. Meetings were held throughout the city to help people understand this draft and to gather feedback.

The Zoning and Planning Committee of the City Council (ZAP) started their review of this draft in 2020 by looking specifically at the residential areas throughout the city. However, after much discussion, it was clear that there were still many questions and a range of thoughts on the proposal.

Beginning in 2021, planning for village centers zoning began. One of the first steps in this process was to reach out to the community to see what people thought the city’s goals should be for our villages. Close to 2,000 people gave input through vision kits, on-the-spot surveys and an on-line forum.

Based on the takeaways from the community engagement and from the analysis by the Planning Department and Utile, the city’s consultant, the new zoning code will strive to:

At the start of 2022, Utile presented an economic analysis of Newton’s current zoning showing how it negatively impacts the village centers. At the same time, Utile began to outline ways that zoning could help the city meet the goals that people said were important during the initial phase of the community engagement.

Based on the community feedback and the economic analysis, Utile and the Planning Department developed a 12-point framework for making changes to zoning in the villages. To address both the different sizes of Newton’s villages and the diversity of scale within the villages, the framework proposed 3 tiers of zoning. Each tier represents different scales of development with different height limits and different size buildings.

This proposed framework had 12 points that were carefully considered in May and June by the Zoning and Planning Committee (ZAP). Many Councilors not on the ZAP Committee attended these meetings to weigh in on the framework. After each point was discussed, a straw poll was taken to get a sense of the extent of agreement among the Committee members. There was unanimous support for most of the 12 points and the balance had support from a super-majority of the committee. 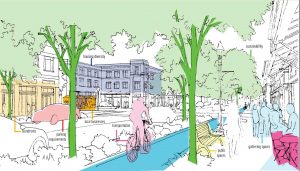 The second phase of the community engagement occurred during September and early October 2022. The Planning Department and Utile developed visual materials to help clarify the options within the framework. These materials were on display at the Library and are still available online.

Over 90 people volunteered to hold meetings throughout the city to present the ideas and gather feedback. There were also on-the-spot discussions in places people gather, focus groups, and a citywide virtual event. The online feedback survey had over 1,000 responses.

This feedback was compiled, analyzed and then presented at a Zoning and Planning Committee meeting in November 2022.

Taking the framework and writing an actual zoning code is very complex and technical and involves the city’s Planning and Law Departments plus the city’s consultants, Utile. A first draft of the village center maps showing the different zoning districts was presented at ZAP on October 2022. In November, a first draft of the zoning and design standards for village centers will be presented.

The Planning Department will meet with residents, business owners, community organizations, along with the city councilors to review the draft of the maps and the zoning ordinance. Comments to City Councilors may be made at any point. This feedback will then be used to develop another set of maps and a new draft of the ordinance in early 2023.

After this period of discussion and revisions to the maps and code are made, ZAP will review them. ZAP would then hold public hearings. Revisions could continue to be made in the draft of the code.

Then, there will be a vote on the amendments to the zoning code by the full City Council.

The City Council wants to give priority to zoning that would be best for the village centers before looking at the state’s MBTA Communities Multifamily Zoning law. At this point, the Planning Department projects that the zoning in just the village centers will not be sufficient to meet the requirements of the new law.

The next step for the ZAP will be to look at zoning for the corridors of development in Newton – Needham St., Washington St., and Rt. 9. There will be opportunities along these corridors to further meet the requirements of the MBTA Communities lai